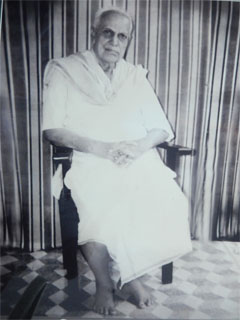 Pandit Kaviraj Dr. Ananta Tripathy Sharma born on 10th February1905 in Jagannathapur Sasana, P.O. Gunthapada, Ganjam district, Odisha. His father Shri Gadadhara Tripathy was a famous Vaidya as well as Astrologer in those era and mother Shrimati Mohini Devi was a house wife. He was the youngest among three brothers. Elder brother Sri Chandra Sekhara Tripathi was a learned Sanskrit Pandit, educated from Kashi. His early education was from his elder brothers chatasali, later his uncle took him to Baripada to study Vykarana Madhyama. After completing he joined Vijayanagar Sanskrit College to obtain “Sahitya Shiromani” degree in1925. On invitation of Parala King he Joined as lecturer in English College, Paralakhemundi on 14th june 1926.There he was attracted to English studies and by his own effort obtained I.A. and B.A. degrees. The king of Parala was highly influenced by his personality and depth of knowledge and appointed him as Lecturer of Sahitya in Sanskrit College. His presence made it a famous institute of Sanskrit.

In those days child marriage was a social taboo, it hurt him a lot in the inner sense and started a movement against it. With editor of Dainik Asha Shree Shashibhusan Ratha, they started a regular movement in writing and spreading the message among people of Southern Orissa. Later he was attracted towards Ayurveda and completed Ayurvedacharya degree. After completing the degree he started a clinic , which was spreded to Vijayanagaram, Parvatipuram, Srikakulam and Brahmapur as separate units.

In 1946 i.e. before independence it was planned to institute a district board and they searched for a good candidate for aska constituency. The communist movement was too strong those days , so the congress committee was in search of a efficient candidate to win the election . Due to his popularity Ananta Tripathy Sharma was unanimously elected for the post. There was a tough contest but at last he won the election. After his election many centers of Ayurvedic treatment started replacing the allopathic centre as a part bof Swadeshi movement.To supply proper medicines to those centers one central Pharmacy was also constituted . Because of his generous activities congress decided to make him the MLA candidate for Paralakhemundi constituency. He won this election too due to his huge popularity. After being elected to the assembly he got a broad field to popularize Ayurveda in the State as well as India. He presented many proposals for the betterment of Ayurveda to the govt. He was elected as the state candidate for All India Ayurveda Mahasammilani. He too played an important role to start a uniform BAMS Course all over India. With this aim a team was constituted in Odisha , as a result of this Gopabandhu Ayurveda Mahavidyalaya was established at Puri to start BAMS Course in Odisha. During his period he under took many other projects for the development of Ganjam district as well as Ayurveda. He was later elected as Member of Parliament from 1962 to 1971 , i.e. continuously three times . Due to his personality very soon won the heart of eminent parlamenterians as well as Prime Minister Pandit Neheru.

He had a special dedication for the development of Ayurveda, due to his active participation in 1957 he was elected as the President of Nikhila Bharata Ayurveda Congress. He was the only odia to be there in this post. After division of congress to Indira Congress he gradually kept him away from politics and dedicated more time for development of Ayurveda and Literatures. To fruitful these causes he Established Siromani Press . Now it was time to start an Ayurveda College in Brahmapur. He tried hard, consulted many eminent persons , collected money from different sources as donation and started the college on 15th August 1978 at Chaturbhuja Dharmasala , Berhampur , later sifted to Ankushpur. In 1990 he celebrated twelve year competition of institute and left the world on 11th July 1991. His created college is now named on his name and will remain immortal to carry his message for the next generation for ever.